Elias Lönnrot was a versatile scientist and cultural influencer who compiled not only the Finnish epic poetry Kalevala, but also an extensive herbarium. The city of Kajaani, which owned the Lönnrot herbarium at the time, donated it to herbarium TUR in 1922. The original extent of the herbarium is not known, as after Lönnrot’s death the collection was used for decades in school education and during that time some of the specimens may have been lost. The donated collection comprised 930 specimens, many of which were in such poor condition that they could no longer be salvaged. The surviving herbarium includes 751 sheets, some of which have several specimens mounted on them.

Where possible, specimens have been preserved on their original sheets, which, however, due to the fragility of the original paper, are attached to new sheets. For some specimens the damaged original sheets have been replaced and the specimens are mounted directly on new sheets. Most of the herbarium was collected during the years 1860-1864. In addition to Sammatti, Lönnrot’s domicile, the most important collecting locations were Sääksmäki in Valkeakoski and Västanfjärd in Kemiönsaari. However, Lönnrot have not collected all the specimens of his herbarium by himself. For example, plants collected from Västanfjärd in the summer of 1857 are suspected of being collected by Lönnrot’s foster son.

The digital herbarium of Lönnrot 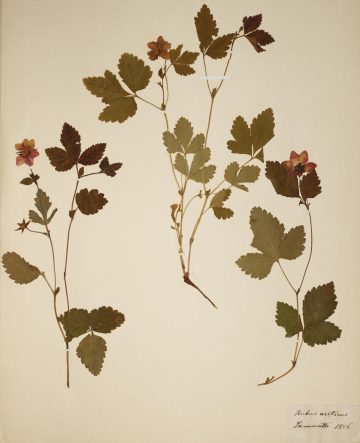 According to Lönnrot, the Arctic raspberry has the most eminent taste and smell of all Europe’s wild berries . This specimen was collected by Lönnrot in 1856 from Sammatti, which was his home village.